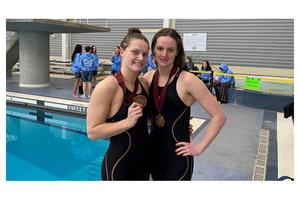 Sacred Heart Academy's Swim Team was crowned NYS Champions - the first time a Catholic school has won the girls meet.
Congratulations to SHA Varsity Swimming – 2021 New York State Federation Champions! The Spartans combined to break five state records in the girls swimming state championships at Ithaca College this past weekend.
Sacred Heart became the first Catholic school to win the state meet, and SHA junior, Cavan Gormsen became the first swimmer from a Catholic school to be named Most Outstanding Swimmer.
SHA’s historic day at states was a team effort with each student-athlete playing her part.
"Of the 10 swimmers that represented Sacred Heart, each qualified for a scoring event – all of which adds to our overall total, helping us to the historic win,” said Head Coach Mary White.  “I am most proud of how they continually support each other – whether it be in the pool, studying on the bus, they are exceptionally bonded teammates and are truly unselfish winners.”
In addition to her overall honor, Cavan’s 200 freestyle win set a state-record and All-American automatic time of 1:45.92. She later topped her own 500 freestyle record with a win in with an All-American automatic time of 4:40.73.
Tess Howley ’23 won the 100 butterfly in an All-American automatic time of 52.37 after she set the state record the day before in 52.06.  She later set the state record in the 100 backstroke in an All-American automatic time of 53.13.
SHA's 400-yard freestyle relay team of Howley, Gormsen, Catherine Dean and Lily Gormsen, swam to a state title in a state-record setting time of 3:25.15.
“That’s definitely the coolest part in my opinion, especially in the state record," Gormsen said to Newsday after the win. "I have my sister on the relay and two of my very close friends in Tess and Catherine, so it was so fun and just to be able to stand on the podium with three girls I care about a lot was a great feeling."
"It’s because you’re not the only one swimming in it," Howley added in the article. "You swim it for other people and I think that’s a really close bond you have with your relay team."
The 200 freestyle relay team of Catherine Dean, Makayla Pearce, Cavan Gormsen and Tess Howley took home a state title in the 200 freestyle relay, swimming an All-American automatic time of 1:35.05.
Congratulations to our amazing Spartan swimmers and Coach Mary White!
Read the Newsday article here (Newsday subscription required)