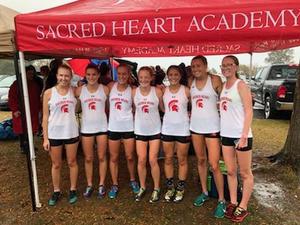 The ladies of Sacred Heart Academy's Cross Country team ran to victory, earning them the League Championship title in both JV and Varsity.
The pouring rain did not stop the Cross Country team from leaving Sunken Meadow Park with another NSCHSAA League title. This marks back to back league titles for the team and Coaches Haun and Mongitore.
The varsity team was led by Senior Maggie Maier, who won her fourth straight title, which has never been done by an individual in the league. Maggie was also named the league's female Scholar Athlete.
Marie Naudus, Shannon Thieke, Courtney Koleda, Helen Moloney, Bridget Rosso and Sophia Fitzpatrick made up the rest of the varsity team running great races to help solidify the win.
The JV team was led by sophomore Kim Hopkins who won the JV race. Freshman Devin Parchment was close behind and came in second. Shannon Maier, Kendra Daly, Dierdre Nolty, Courtney Cummings and Hannah O'Neill rounded the top 7 for the JV team, running great races all finishing in the top 11 in the race.

Congratulations to all the runners on a successful season. Go Spartans!