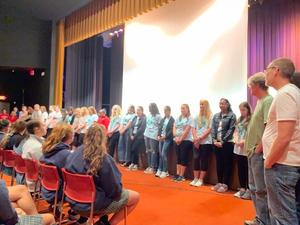 In support of the mission of the Sisters of St. Joseph (CSJ) and their congregational commitment to "all is one and that our call is to an inclusive love that seeks this union with God and the sacred community of life that includes creation - air, soil, water, plants and animals," Sacred Heart Academy was represented by 32 students and 5 faculty members at Friday's Global Climate Strike, where they joined tens of thousands of high school students from cities nationwide. The students joined representatives from the other CSJ sponsored schools (The Mary Louis Academy, Fontbonne Hall Academy, and St. Joseph's High School).

School day for the rest of the student body began with a school-wide assembly that was centered on Pope Francis' encyclical, "Laudato Si," which calls for care for our common home and God's creation. During the assembly, students addressed their commitment to being good stewards of the Earth.

President Kristin Lynch Graham and Principal Sister Jean Amore, CSJ, believe that having students participate educates our whole community on our responsibility as Catholics to be good stewards of the Earth, both for today for future generations.

Similarly to other Catholic supported initiatives, for example, the March for Life, the students selected to represent Sacred Heart were excused from class since this is a school-sponsored trip.